Time is running out.

Christmas is almost here, and you still haven't worked your way through that holiday shopping list yet.  But don't worry, there's hope yet— thanks to social buying websites like Groupon, LivingSocial, SocialBuy, Eversave, Tippr and BuyWithMe. 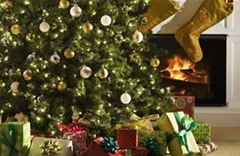 Sites like Groupon and LivingSocial aren't really the kind of places you would traditionally turn to for Christmas shopping, because they're tailored specifically for you, to help you take advantage of great deals at local businesses in or around your area.

Watch a video report on Groupon & LivingSocial by CBS News.

This year, I seem to be using these sites selfishly, buying great deals for myself and my significant other.  Then, I had an epiphany— buy discounted gifts for people on my Christmas shopping list.  Now, these aren't the types of gifts you would expect to stuff in a great big box and hide under the Christmas tree.  Rather, these gifts seem more appropriate for people you won't be seeing during the holidays. 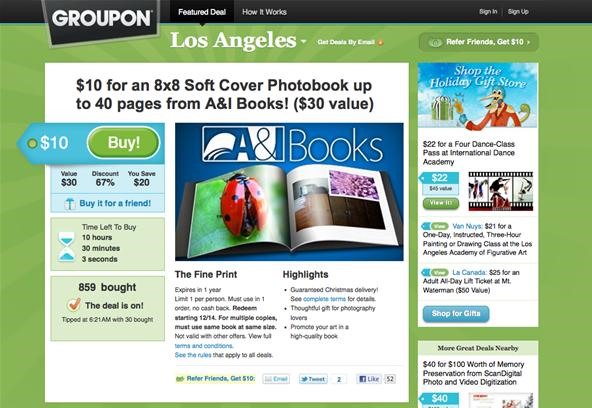 With daily coupon sites like Groupon and LivingSocial offering deals from 30 to 90% off, why not take advantage of those deals in other cities?  Cities that your family and friends reside in?

According to a recent survey by Eversave, 45% of respondents said they would be looking for gifts on daily deal sites and 91% said they would appreciate getting a deal voucher as a gift (see video below).

So, what are some of the best ways to use sites like Groupon and LivingSocial to help get your last minute Christmas shopping done?

Firstly, you have to join one of these daily coupon sites:

Step 2 Know Your Way Around

Getting started is really easy.  Once you sign up, you just need to subscribe to your daily deal area and you'll start receiving emails for the deal of the day.

You can also sign up for various locations, from Los Angeles, CA to Columbus, OH to Ottawa, Canada, and opt-in to emails for them, too.

Basically, if you live in Los Angeles, sign up for your personalized deals.  If your sister lives in Columbus, sign up for that city in addition to see what kind of deals look good for her.  If your friend lives in Ottawa, add that as well.  This makes it possible to keep an eye on everything that pops up— for you and everyone on your Christmas list! 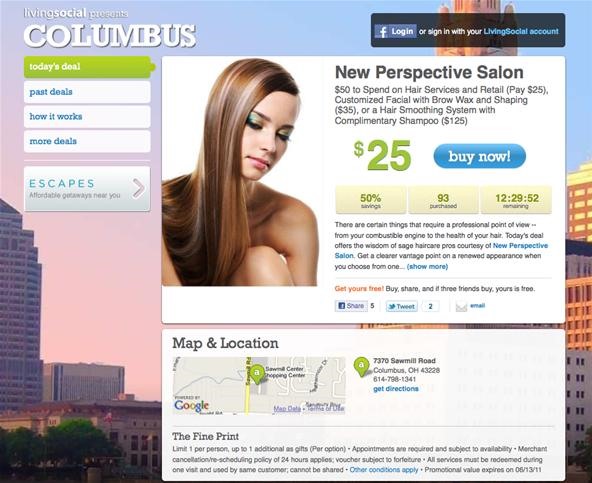 But you don't have to have your email inbox bombarded with emails form Groupon and LivingSocial.  Alternately, you can search the site daily for deals in those cities, while keeping only your area on the email list.

Step 3 Get the Mobile Apps

Some social buying sites, such as Groupon and LivingSocial, offer free iPhone and Android apps so you can check out and buy deals on the go.  This is perfect during the holiday season, so you can shop while your shopping! 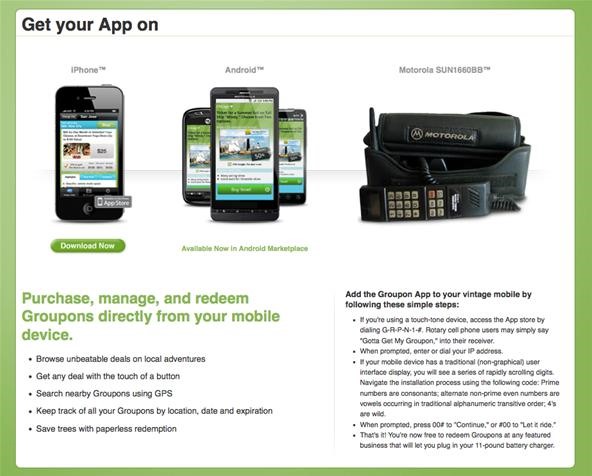 Don't miss out on any of the deals!

Each of these sites runs off a certain social aspect: The deals only become available when a predetermined amount of shoppers take advantage of the coupon.  The number or required people to join varies from deal to deal, and can be virtually nothing.  But once it's reached its "tipping point", the deal is legit and for the taking.  If not, the deal goes bust and your credit card never gets charged.

This may have been more important in past months, but now it's almost irrelevant, because so many people use these sites, there's no reason why a deal won't reach its "tipping point".  I've never seen a deal go bust, but it has it has happened. 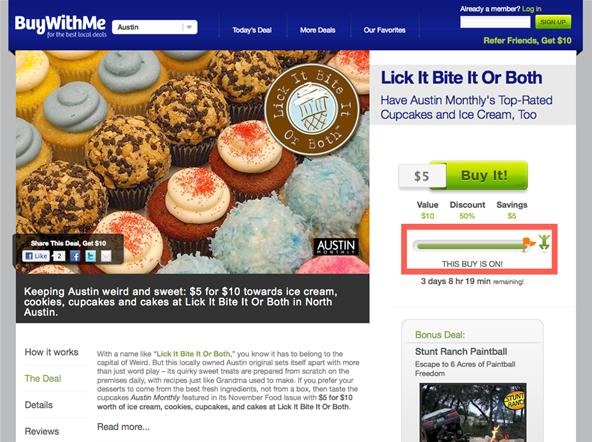 In addition to making sure you get the deal you want, there are other benefits when it comes to recruiting...

An article on MoneyWatch best describes the process:

To help a deal you want reach its "tipping point," refer your friends to the same deal you found, encouraging them to jump on the offer.   After you opt to buy a deal, many of the social buying sites let you announce your recent purchase to your friends with a referral link.  At Groupon, for each new friend that signs up and buys a deal through your referral link, you'll get a $10 referral bonus.  So when letting your friends know about the amazing deal you found, tell them to "use my referral link to get the same deal and help me win 10 bucks."   And if the deal is for a restaurant or local event, mention how fun it would be to experience it together as a group.

At LivingSocial, the deal might even end up being free for you if you recruit enough people to the same deal.  For some offers, you need as few as three buddies.

Keep in mind, the importance of referring friends depends on where you live.  In big cities like New York, Boston or Washington, D.C., deals tend to hit their tipping points on their own.  But in cities where social buying sites have less of a presence, it may be trickier to activate deals.  For example, earlier this year Groupon offered of a tour of Michael Jackson's home in Gary, Ind.  It failed to reach the tipping point. "Everyone loves Michael Jackson, but not enough to visit Gary, Indiana," says Julie Mossler, a spokesperson for Groupon.

Many deals aren't available right away, and with Christmas closing in, most deals probably won't even be able to be redeemed until after the New Year.  But those deals are usually valid for up to a year, so there's no worries on when you or the recipient will be able to redeem the coupon.  Some have blackout dates, so make sure you read the fine print. 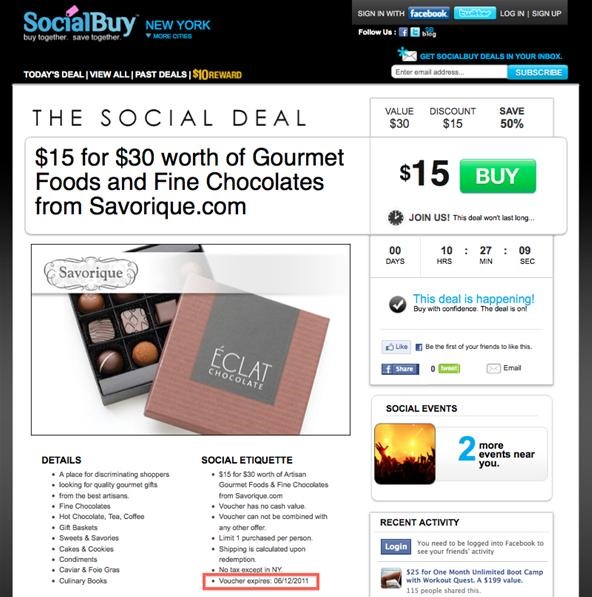 But beware: There are deals that expire sooner, rather than later.  Make sure you see if the expiration date is good enough for a gift.  If it expires in a month, it's probably not a good idea for a Christmas present.  If it last four months, you're probably golden.

Step 6 Give the Gifts

So, how exactly do you give these great deals as gifts?

Unless specifically noted, social buying sites let you transfer your vouchers and coupons to others as gifts.  Just make sure it's possible before jumping on the bandwagon.  Contact the site's customer service department for more details, or search their help forums.

Hey... if worst comes to worst and you can't transfer them, you can always go visit your family and friends and use the coupon as a way to get out and explore the area where they live.  Then, it turns into a gift for yourself!

And during your online Christmas shopping, don't ignore yourself!  You could be in the zone, only looking for great gifts for your family and friends, but sometimes the deals in your area are too good to pass up, so don't pass them up! 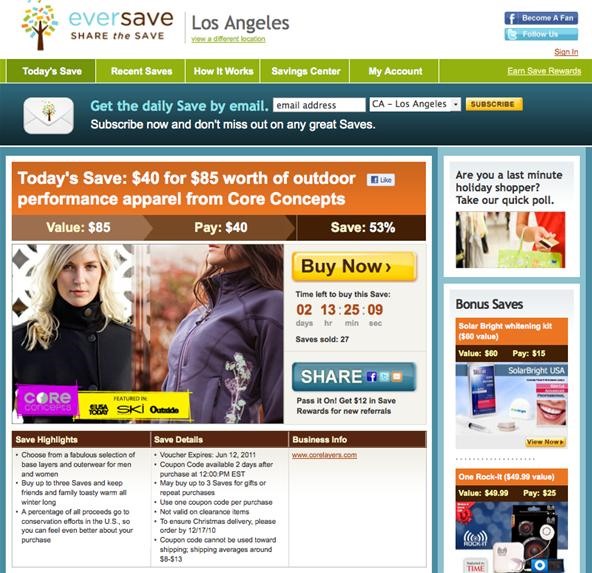 Stack up on the great deals and live in comfort next year!

Want to master Microsoft Excel and take your work-from-home job prospects to the next level? Jump-start your career with our Premium A-to-Z Microsoft Excel Training Bundle from the new Gadget Hacks Shop and get lifetime access to more than 40 hours of Basic to Advanced instruction on functions, formula, tools, and more.

Other worthwhile deals to check out:

Join the Next Reality AR Community

Get the latest in AR — delivered straight to your inbox.

More and more daily deal sites are popping up and offering ways to save, and this is great news for consumers looking to get discounts, especially for the things they need for the holidays.

A great site to use to find the deals and sales in your area is http://www.dailydealpool.com. They send you a daily email with the best discounts, so you can always find the best savings to use every day.

Cool! That's a great idea. Sure cuts down on the emails flooding the inbox. Thanks!